Skip to content
Get The Shop App   |    Member Login

A word from our friend Rich Carbs

Nobody is lucky forever. Maybe it will be a parking lot or possibly a tree that grew 4 inches wider right after you put your car in reverse. Now you are looking for the best solution to an unfortunate situation. No doubt you have seen the signs for paintless dent repair plastered around the neighborhood of the old style body shops that Bondo, sand and then paint automotive sheet metal. Paintless dent repair has two distinct advantages over this old style repair. Those are the fact that (1) after the repair your paint still matches as well as it did before and (2) there is no Bondo sanding dust in every nook and cranny of the car. Let me also pass along here the one biggest negative point of paintless repair……..it costs just as much as the old style Bondo repair. Pricing has been adjusted upward in the last four years to meet the demand taking the previous two benefits into account. Welcome to the 21st century!

If your paint appears to be unscathed then you might have a candidate for a metal massage wizard to spend a few hours on your car. Before I list two local companies that appear to be at the top of their game I would like to first show what they have to go through to get you driving away with a smile. What is changing is the gauge and type of metal that they have to work with. An example is the old SAE (Society of Automotive Engineers) specification that sets the actual thickness of sheet metal. Most mid 60’s cars had between 16 and 18 gauge metal on them. Keep in mind that the thickness of metal is inverse to the number. Fourteen gauge is noticeably thicker than eighteen gauge. On modern cars the gauge depends on where you measure it. The new recycled metal used on late model cars has had a fair amount of carbon added to it in the recycling process which makes it stronger and possibly more brittle. The Shop’s metal expert, Elliott, finds that older Porsches have approximately 19 gauge metal. He rebuilds floor pans with 18 gauge metal. The lower down on the body of a late model car the thicker the metal is. Now apparently SAE just monitors the government crash test results rather than the absolute gauge thickness. Before I leave the subject I am going to reveal the true difficulty with this type of dent repair. If you analyze this situation a problem comes with what to do with the excess metal. If you have a straight line (the original metal) and a crooked line (damaged metal) then it should be obvious that the dented metal has been stretched longer than the original dimension. This is where the artistry comes into this industry. The repair does not include complete remanufacturing of the metal so the longer (stretched) metal can easily be .002” to .006” longer than original. A set of skillful hands will make this excess end up on the outside or top of the damaged area. This is why repaired areas are very slightly taller than the original metal.

The car pictured here brings up an interesting situation. 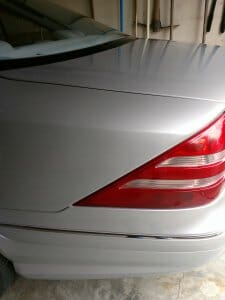 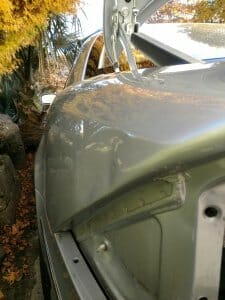 It was taken to 3 different paintless repair shops. The first 2 would not attempt to repair the car saying that the Mercedes metal was too strong (their own words) but the third one would have it fixed in 2 hours. He took the car off for repair so I returned two hours later. Just as I got back after a long walk the car drove up to the original spot for repair….without any repair done. The same issue of metal strength was brought up. Here’s a bit of an odd circumstance. The damaged area in the picture is aluminum!

The 4th shop had no problem with this particular car so I asked to be placed on their job list. I was hoping to have it back three days later in time for the week-end. That was around October 28th. The appointment date was……Dec 6th!

Again the demand is high for the mentioned reasons. As luck would have it, there were several cancellations so I ended up actually having the repair done two weeks earlier. I don’t actually care how they got this metal back to, in my opinion, as close to original as possible. If they actually gathered around the car with sorcerer’s hats and wands it’s OK with me since the work is outstanding and is well worth the expense. I also noticed that removing the ‘in the way’ parts did not reduce the price.

Here are a few pointers for those who are looking to pursue these repairs. Contrary to the signs that you see for this service, these artisans have an established ‘used car lot’ route that they service each week. Ask any used car sales manager and he can probably advise you of what day these repair people will be coming to their lot. If you meet one in the field have cash ready and open up the conversation by saying “I’d like some work done and I will pay cash for it as well as throw in lunch for your efforts”.

Seattle actually has what is referred to as an ‘automotive journalist warehouse’ that contains large amounts of new cars which are loaned out to automotive journalists. One of the metal magicians that keeps this inventory looking flawless is ‘David’ at Same Day Dent Repair (253) 606-1679. He will come to your location once arrangements are made. Another shop that is a drive-in only shop is Dent Solutions located in Bellevue at 13421 NE 20th Street with phone (425) 919-3087.

Next week I plan to knock on the door of the auto journalist warehouse and tell them that “I am the automotive journalist from The Shop and I’m here to verify that the published top speed of 260 mph of the new Bugatti Cheron is actually achievable.”

Have questions or comments? Rich can be contacted at richcarbs@theshopclubs.com

Posted in Gearheads
Scroll To Top